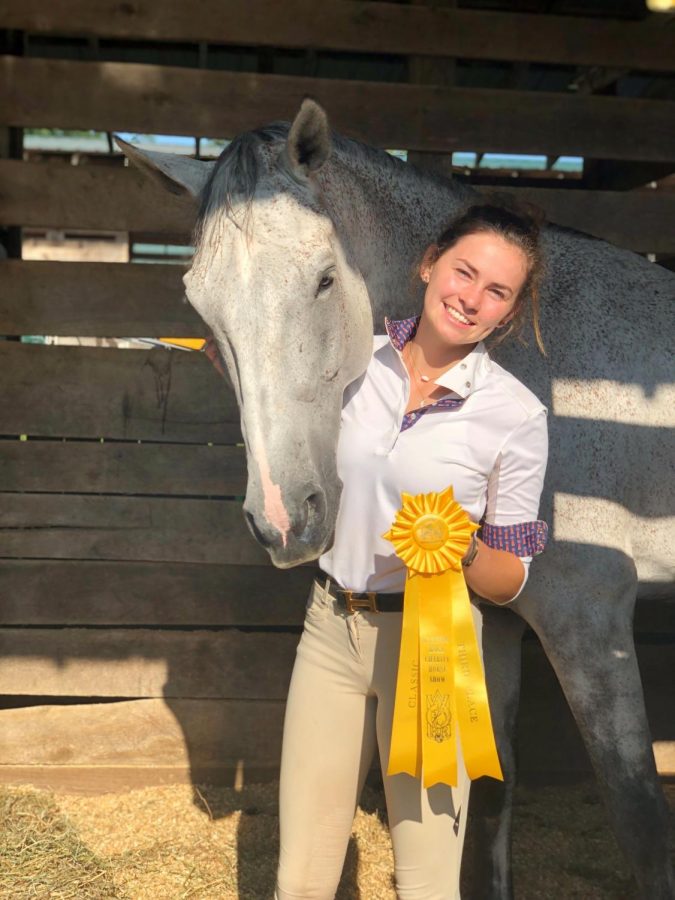 For many, fall break means hitting the beach but for Hutchison sophomore Abigail Arnold, fall break meant hitting the horse show arena and bringing home national honors with her horse, Quinito. The two spent fall break competing against some of the nation’s best English-style equestrians. Just qualifying for the competition is an honor they have been working toward for months.

“I went to the United States Equestrian Federation (USEF) Dover Medal Finals over fall break. To get there, I had to win 20 points from ribbons across the country. So mostly when I show, I show on the east coast, so I’ve been building my points to got there all year. Once I qualified, I was really, really excited,” explained Arnold.

It was Arnold’s first time to compete at this national event. There were strict requirements to qualify, which meant there were only about 250 contestants who get an invitation to compete. Arnold finished strong.

Success has meant a big commitment from Arnold, who has spent about 15 weekends so far this year in horse show competitions. The Dover Finals have inspired her to increase the number of shows she will compete in for next year. Arnold practices five days a week, every week of the year. There is very little time off.

In competition riding, there are different styles, including dressage and jumping and Arnold’s specialties, hunter jumper and equitation.
According to the United States Hunter Jumper Association (USHJA), hunter jumper is also known as show jumping and offers competition for riders of varying skill levels. Hunter Jumper classes focus on the horses skill set while equitation judges the rider’s ability, form, and skill to allow the horse to perform at its best.

According to the USHJA, there are about 1,000 different competitions nationwide each year. Some of Arnold’s favorite competitions are in Nashville, Tennessee; Charleston, South Carolina; Harrisburg, Pennsylvania and Washington, D.C. She and her family usually travel to cities within driving distance so they can transport Quinito themselves, by horse trailer. The Arnold family usually arrives at the event a day or two early to prepare. “Usually, a trainer will go exercise Quinito early in the morning and later in the day I’ll have the actual showing,” explained Arnold. “I’ll get ready for competition about 30 minutes before and then go out and warm up. There are usually two days of showing.”

It is something that is in her blood. “My mother was really into it, so I’ve kind of been into the horse world all of my life, but I started competitively about 2 years ago,” says Arnold.

Besides Arnold’s strong work ethic, 8 year-old Quinito also plays a part in the pair’s success. “I love the way the partnership in this feels because you really have to understand your horse. It’s not just you. You have to build a bond and a trust together and that’s what makes showing so special,” notes Arnold. She admits that Quinito, or “Charlie” as she calls him, isn’t always cooperative, “He’s kind of grumpy. I’m not going to lie to you,” she confesses with a laugh. “Sometimes, he’s not very nice, but I love him anyway.”

Arnold has never been seriously injured, but she has fallen off a few times. “If I were to get injured, it would take a lot to get back on, but I know that I always would.” The dangers of horseback riding and jumping are never too far away. “The other day, I saw somebody fall off and break their neck. That was really scary,” Arnold.

When Arnold is not competing in equestrian events, she’s running track for Hutchison. She loves that sport as well, and it helps her stay in shape for her Hunter Jumper and Equitation events. In November, Arnold was a hometown favorite when she competed in the West Tennessee Hunter Jumper Association’s Harvest Time Horse Show, held during the first weekend in November at the Germantown Charity Horse Show Complex.