I asked one of my friends recently if she considered herself a feminist. She told me that she agrees with everything that feminism stands for, but she does not consider herself “a feminist.” This confused me. I asked her why she wouldn’t identify as being a feminist if she believed in all of the principles. She replied with, “It’s not really my thing.”

I considered her response. The way she referred to feminism made it sound like there was a certain kind of lifestyle in being called a feminist, a certain kind of reputation. For the most part, I assume that many believe that this “reputation” goes hand in hand with hating men, frowning upon stay-at-home moms, despising chivalry, complaining just to complain, and, God forbid, not taking your husband’s last name. I also assume that many who believe this would not consider feminism their “thing.” I wouldn’t blame them. I, too, would not want feminism to be my “thing” if this were the case, but thankfully for us women, it is not.

Let’s break this down, shall we? The Merriam-Webster dictionary defines feminism as “the theory of the political, economic, and social equality of the sexes.” To put that in its most basic terms, it is simply the belief that men and women should be equal in all aspects of life. That is all. Seems pretty straight-forward, right? Well, you would be surprised by how many people take this a different way.

Let’s forget about the word feminism for a minute. Let’s forget about it completely, and let’s just ask the question, do you believe that men and women should have equal rights? In my opinion, I believe that they should; however, because I am one person of many in our high school community, I wanted to hear your opinions as well.

In September, a survey was sent out to the Hutchison upper school student body asking two questions: do you believe that men and women should be equal and do you consider yourself a feminist. Of the 198 responses received, about 87% responded yes to men and women being equal, however, only about 46% said that they considered themselves feminists. After doing more research on the topic, I found out that this trend was not specific to Hutchison. This is a worldwide phenomenon An article from HuffingtonPost published in 2017 stated that, in a similar poll, about 82% of Americans voted that men and women should be equal whereas only about 20% voted that they would call themselves feminists (“Poll: Few Identify As Feminists, But Most Believe In Equality Of Sexes”). From evidence given in both the survey and worldwide statistics, the majority of us would advocate for equal rights; however, immediately when we throw the word “feminist” into the mix, people’s opinions started to change. Why is this? Why do we fear the word feminism?

Unfortunately, I believe the answer to this question lies in the negative connotation so closely associated with the word “feminism” today. Nowadays, feminism is connected with emotions or beliefs that completely derail it from its original purpose which deters people from the cause and makes them hesitant to participate in matters of equality. However, too many people today misunderstand or misinterpret the word “feminism.” Fairly often, people will hear the word “equal” in the definition and compute it as “better,” but here’s the thing: feminism has nothing to do with becoming the superior gender or hating men for existing. The two are not connected in any way. It is about knowing that men are very capable of doing many jobs and knowing and acknowledging that women are equally as capable at doing those same jobs. It is about seeking out the equal opportunities to pursue those jobs. Some people might also take its meaning as condescending towards women who do not want the same jobs as men. That, again, is not anywhere near what feminism means. Feminism has nothing to do with hating other women for not taking paying jobs or working outside of the house. While some may feel that feminists are asking women to “be better,” no actual feminists feel this way. No one is asking women to be better. No one thinks women aren’t doing enough. We are simply asking for equal recognition in everything that we are doing. Feminism is about ensuring that women are able to reach their full potential in whatever they choose to pursue and get paid equally. It is about wanting to have the choice to successfully work either inside or outside the home, and choosing what is best for you. It is about equality and fairness for all people.

Another issue in addressing this debate is that fact that sometimes people are very educated on the topic of feminism, yet they are still reluctant to label themselves as such because they know about the implications of the word. This makes it even harder to help the cause because it feeds into the idea that feminism is bad. If enough people submit to not being a feminist only because they are associated with these false ideas, then where will that get us? When people don’t consider themselves feminists because of these reasons, then of course people are going to assume that those reasons are true. I’d like you to think about your political party for a minute. I am almost positive that there are some people you’d rather not be associated with who identify as being in the same political party as you, yet this does not discourage you from voting as either a democrat, republican, or independent. In my survey, I noticed that the majority of students who did not consider themselves feminists explained that it was because they did not want to be connected to the more extreme beliefs. My take on this is that it is just like any other organization.

There will be those who are more extreme and there will be those who are more neutral, but no one is chastising anyone for having different opinions. At least, they should not be. For those of you who would like to call yourselves feminists but are afraid you do not fit into the “typical mold” of a feminist, then hear me now: there is no “typical mold” of a feminist. You may not agree with every opinion common to feminism, but that does not make you any less of a feminist than others.

Now I know some of you might be thinking: I could honestly care less. I am a High School student just trying to pass my classes and get through the day. Whether I am a feminist or not is not exactly at the forefront of my mind. I understand that. We are all very young. We are not expected to be at the front lines of these heated debates. We have not necessarily faced discrimination in the workplace because of our age, either. We go to a school where our motto is “Anywhere she can imagine.” We are not exactly limited in our resources and our opportunities; however, whether you realize it or not, we face adversity every day because we are women. While you may not feel it at school, I am willing to bet money that almost every Hutchison student has had an encounter with a private school boy in which they have been told that they go to an “easy school” or that her school is “a joke.” Why is that? Why do they believe that they have the right to tell us that we go to an easy school when we work just as hard and just as much as they do? I am also willing to bet that you’ve heard the nicknames and phrases associated with any private all-girls schools. This is absolutely unfair. It shows a complete lack of respect for our intelligence and our hard work. It places us in a position lower than themselves. Why do we let this stand? Why do we allow men to make us feel insecure about our own intellect? Feminism fights to combat these opinions and prove the equal worth and recognition of every young woman receiving an education. 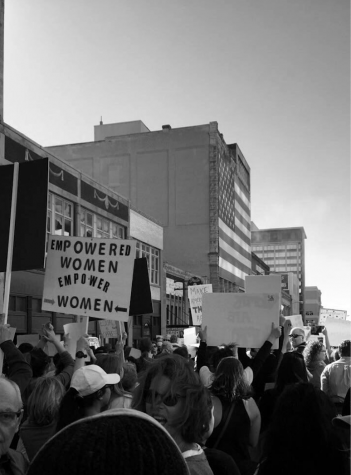 It is a place to feel accepted and to accept others, regardless of gender.

For those you who did not immediately roll your eyes and toss this article aside after reading the title, I thank you. I know that some of you may be tired of hearing about feminism. I know that some of you may completely disagree with everything I have said. I don’t mean to come across as angry or agitated with anyone; I just merely want to bring this issue to light. I realize that this article is not going to single-handedly change how people perceive feminism, and I do not expect it to. However you identify yourself, whether it be a feminist or not a feminist, I am not here to make you feel bad one way or the other. I respect everyone’s right to their own beliefs and their own opinions. I just want everyone to be educated on the topic before they make a decision. While I do not expect much to change today, I feel like starting the conversation now is necessary. What I would like to see one day is for women to stop fearing feminism and start becoming fearless feminists.